Eden at the Edge of Midnight – PDF

Sixteen-year-old Sammy Ellis, meddles with the magical bracelet that was meant to send the chosen one home and gets sent in their place, transported to the realm of Perseopia where she finds herself lost in a twilight land of giant mushrooms and pursued by dark forces.

Categories: Book One, The Vara Volumes

A young-adult fantasy adventure unlike anything you’ve read before.
Imagine the Neverending story, spliced with Howl’s Moving Castle viewed through a Guillermo del Toro fever dream.

‘The writing is incredibly slick and polished, the universe so rich, vibrant and complex, the story so fascinating and well-paced. If this book exploded overnight and became a massive success, it would be well deserved. ‘ Goodreads Reviewer, five stars.

There exists a secret realm outside our own, the original Garden of Eden, sealed from the rest of the world and populated with the fittest of men and women. A paradise that became ravaged by smog that choked out the skies.

Now the realm exists in darkness and its people need a champion, a chosen one to save them from the poison that cloaks the land and threatens to smother its inhabitants.

That’s what they needed. They got sixteen-year-old Sammy Ellis instead. Her only responsibility was to help the “chosen one” open a gateway into the realm. But, not only has she entered the land in their place, she’s also locked them out in the process.

Sammy finds herself lost in a twilight land of giant mushrooms and pursued by dark forces. Can she find a way home so the true chosen one can return or has the realm been doomed by her actions?

Back to the Vara – John Kerry 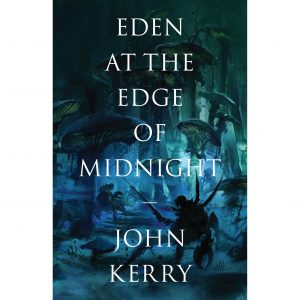 Eden at the Edge of Midnight – John Kerry